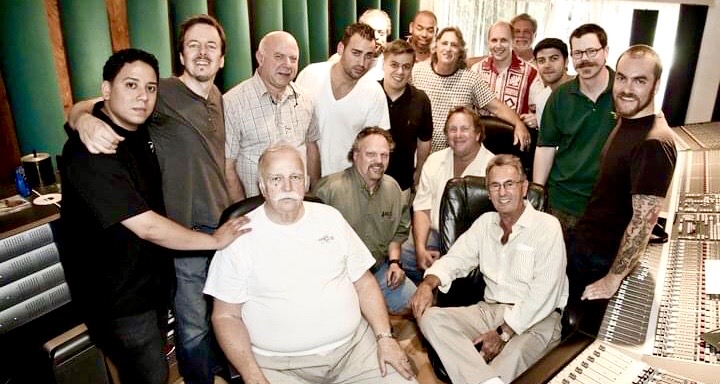 Today marks exactly one year since our friend and musical collaborator Tim Schoorl, died tragically in a house fire that also took the lives of both his parents and their beloved dog.
Tim was a long time friend. He and his bandmates had recently reformed Otis Strange, their band from 20 years ago. They’d pop into the Ottawa recording studio about once a month to make some new music and film videos.
otisstrange.com

Tim was an extremely kind and loyal guy, a big reader and who was happiest when jamming with his buds, with a beer in hand.
You’re never forgotten Timmy!
THREE SHEETS (A Tribute to Tim)

I also found out to today, that one of history’s finest recording engineers and mixers, Al Schmitt has passed on, at the age of 91.
The multiple Grammy winner arguably has the most decorated discography of anyone. From Sam Cooke, Streisand, Quincy Jones to Sinatra, Al has done it all.

I was fortunate enough to be in the room with him when I first studied with Bruce Swedien in Los Angeles.  Ed Cherney, Bruce and Al reminisced while the studio overflowed with goosebumps.  He wasn’t young when I met him and I remember being impressed with the physical shape that he was in. He must have kept a healthy lifestyle to be able to work the way that he did.  Al loved recording big orchestras.

A couple of years after that, I was lucky to spend a bit of time with Ed Cherney in Florida. I was fond of his monster of a beautiful personality and kindness.

And now, just like that, within the span of 18 months, we’ve lost all 3 of these record-making titans. It’s an extremely sad thing.  I often think of lessons that I’ve learned from them. They were no-nonsense engineers that came up without dependency of technology. They depended on their ears, Michael Jackson, Bonnie Raitt, Sting Dylan and Sinatra.   Love you guys!

I highly recommend Al’s book ON THE RECORD.